Simone Giannecchini was a surprise last minuet addition as Andrea could not join us. Simone brought a nice business perspective to the wps-shootout and was very focused on the steps needed to take GeoServer WPS to production quality.

The GeoServer project is well known for its WMS, WFS and WCS implementation. What is little known is that a WPS "extension" has been available on and off since 2008. Originally started by Refractions in 2008; work was maintained by the community (Andrea and Jody) with GeoSolutions really taking over the reins in 2011. 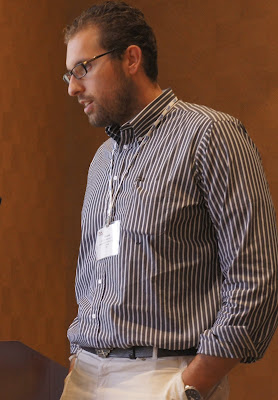 GeoServer was not able to take part in the wps-shootout due to time constraint (no time to set up a server for others to test against). As such I would like to thank a couple wps-shoout members who were able to pitch in so that GeoServer could be represented:

Finally thanks to Simone and GeoSolutions for representing the GeoServer community in person and on stage.
Posted by Jody Garnett at 07:13

Thanks Jody for the kind words but above all for organizing the WPS shootout!