The GeoTools project has moved repositories today - to hardware maintained by the Open Source Geospatial Foundation. We would like to thank Refractions Research for giving us a home for the last five years (they kindly provided an svn repository for us when Source Forge was going through some growing pains in 2003).

The new hardware is faster and has a better connection which will result in a faster build time for those building with maven.

To migrate an existing checkout to this new location please use:

This move also opens up a new maven repository (used to host the compiled geotools artifacts so other projects can use them).

Documentation that has been updated in response to this move:

One great way to get involved with an open source project is to help localize! On behalf of the User-friendly Desktop Internet GIS project I would like to welcome a couple of recent volunteers with some updated documentation on the Resource Bundle Editor.
The "Eclipse Resource Bundle Editor" is a great little front end for editing a bunch of properties files - each one of which contains the human readable text that is slotted into the appropriate place of the application. 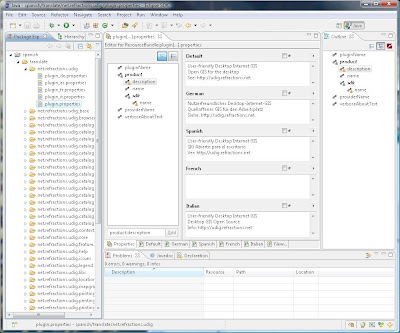 This plug-in has been folded into the Eclipse "Babel" project that appears to be building up a massive database of everything that would normally live in these property files; and then they generate the property files on demand.
Jesse Eichar has been kind enough to bundle up this plug-in with enough extra stuff that anyone can run it; instructions and the required links are on the Adding Translations  of the udig admin website. If you would like to help out you can follow the instructions on this page to translate uDig - without any development experience.
The other thing we capture as part of the uDig experience is online help in the form of a User Guide. This guide is captured as a wiki; and we have several wiki spaces - one for each language being made available.
For the translation effort starting up we have the following newly created spaces:
- Portuguese
- Brazilian Portuguese
For the translation of uDig into Portuguese it sounds like a nabble forum will be used for organization:
- http://n2.nabble.com/udig-translate-pt-f1631192.html
Documentation Harmed in the making of this post:
- http://udig.refractions.net/confluence/display/ADMIN/Adding+Translations
Posted by Jody Garnett at 12:31 2 comments:

Email ThisBlogThis!Share to TwitterShare to FacebookShare to Pinterest
Labels: udig

One of the surprises I found working at LISAsoft (and indeed in Australia) is a history of success with the GeoServer Community Schema branch. Previously my best advice to anyone interested in this area was to hunt down Gabriel or Rob and ask them for help.

Mark Leslie was able to point me in the direction of documentation on how to install and configure the GeoServer Community Schema branch. Apparently Rob has been publishing a war file; and this documentation covers how it can be used.

Since this documentation is available under a Creative Commons license I have posted it to the GeoServer wiki (see GeoServer Community Schema Installation).

The concept of a "Community Schema" is important for anyone working with a rich feature model where they are expected to produce out put that confirms with a pre-existing XML Schema. Occasionally governement or standard organizations publish an XML Schema describing a data product that should be made avaialble *exactly* as described.
Posted by Jody Garnett at 16:27 1 comment:

Email ThisBlogThis!Share to TwitterShare to FacebookShare to Pinterest
Labels: geoserver

Today is the last day of the OSDC Sydney and it has been an entertaining slice of life on the programming side of the street.
I was able to attend due to the worldly Mark Leslie (PostGIS committer who has been missing a lot) being stuck in Thailand. Indeed he was so stuck he was unable to give his talk.
Here are some notes from an intrepid attendee:
- http://myownhat.blogspot.com/2008/12/openspatial.html
As they say here "It is all good". I will provide a link to the slides when I find a server to hold them.
It was interesting that "Location Based Services" made the list of annoying marketing buzzwords this year - along with "Cloud" "Ajax" and friends.
Incidentally Mark has now made it back safely.
Update:
- Python 3 is proving an amusing hurdle for people
- PHP "Traits" seem to have a bunch of the goodness I previously thought was the benifit of Fortress :-) You can get the patch from the wiki (is small clean and can be applied). Decision to take it in has been made - but is waiting on the swith to svn or something.
- Open Australia - seems to be the same track the political thing that we had going in Canada (at least before the Canadian developers made the transition to Ruby)
- An interesting web testing thing that will abuse a range of browsers called Watir
- The lightning talks are very good for watching linux machines reboot as they come to terms with a projector (on the bright side it makes the talks faster and slide free).
- Apparently POVRay (which Paul Ramsey mentioned) has recently gone through the same sort out who wrote the code process that GeoTools suffered - and now can consider moving to GPL 3.
- Microsoft is here and gettling along well (IronPython for example) - they keynote was given by a member of the SAMBA team and also points to mending bridges
- Our mates that provide Confluence, Jira and so on to Codehaus are here with a OSGi based plugin system (that is Spring, Pico etc agnostic). Sure wish they had released that last year; the result looks similar to the Eclipse plugin.xml experience but for server side OSGi apps.
- A good talk on using visualization for rolling out the difference between testing and/or production webservice testing
- Sun was here pushing MySQL (complete with compition for a plasma tv requiring only in depth MySQL knowledge)
- Larry Wall gave a lovely talk with many nice pictures; and the occasional code examples. The contrast with the Python 3 roll out in terms of time taken is interesting and it will be interesting to see how communities handle the migration. Still anything that can help regex get sane will be a useful tool.
- There are more thinkpads here that macbooks here
- Nice lightning talk thanking Larry for Perl (I thank him for his witty writing more then Perl)
- bazzar (or is that bzr) is already taking hold; get and mecrurial also mentioned

My laptop cut out and the remained of my notes were lost! I remember Perl 6 being out before Python 3 and a revolt in the PHP community over the use of \ as a name seperator.

Most of all I was amazed to see the programming languages being run like normal open source projects; I kind of thought they would be more you know stuffy and academic or something.

Microsoft was kind enough to donate test hardware (with all the different versions of windows available in virulized form) to the CSPAN Perl community.

Apparently this offer is open to other organizations - perhaps something OSGeo would be interested in. I would welcome the chance to test on Windows Server 2003 (since I always get odd bug reports from that environment).
Posted by Jody Garnett at 11:24 1 comment: