One of my aims with the OSGeo Foundation is to always be working on the Brand. To that end I have been pushing for member projects to share a common theme (yes that goes way beyond the idea of a little OSGeo logo in the corner of a home page).
Compare the impression made by these these two foundations:
This week I have an oppertunity to put my money where my month is - GeoTools is looking to set up a website (rather than our initial wiki page). 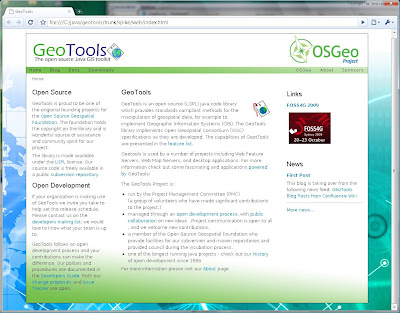 The idea would be to set up OSGeo project and committee websites in a similar manner.
The far side has the OSGeo logo in the corder identifying the role of the webite (in this case an OSGeo project logo is used). A bare minimum of OSGeo links under the logo; along with I hope a roll of images (both sponsors and osgeo activites) such as the foss4g link shown. Under this we could have news for the group (as shown) or perhaps a navigation tree (as per this example) or nothing. I experimented with making this a floating box ontop of the background - and it looked really nifty (but more complicated). I rejected it as it made OSGeo involvement feel like an afterthought.
A minimal navigation bar along the top; where I hope we can identify a few common headings. It would be good to move the current "project", "pages" closer to the projects they describe - perhaps as the "About" page?
The main area in this case has a two column layout; I expect this area to be single column for documentation pages.
How did I pull this together?
- grabbed the basic structure from my udig site; the MapServer community is using Sphinx so I may take that as a recommendation
- background from this presentation template - http://svn.osgeo.org/osgeo/marketing/present/ (I still need to find the background without the gradient applied in order to produce images like the CD cover from the marketting material)
- heading colors - http://wiki.osgeo.org/wiki/Marketing_Material_Samples using a paint program (#004d87 - hopefully when these materials are published they will include RGB/CMKY/Pantone)
- osgeo project logo and font selection from here - http://svn.osgeo.org/osgeo/marketing/logo/ (Bitstream Vera Sans - the logo use guidelines are written up for the previous logo - but they are very clear)
- I had to fool around with photoshop a bit to reproduce some of the effects from the marketting materials such as the green gradients.
In working on this I found a couple cases where the marketting materials are not consistent with our logo guidelines (insufficient white space around the logo; placing the logo over a complicated background; use of different colors; etc...).
Others effects look amazing - but I was unable to reproduce for a website (the use of white lettering with a blue drop shadow over top of the crop circle background - only works if I can find the background without the gradient applied).
I welcome feedback on this one; the GeoTools community is sure to provide me with some - and I am trotting these ideas out to the Marketting committee as well.
Posted by Jody Garnett at 10:43 3 comments:

OSGeo Templates through the Years

When the Open Source Geospatial Foundation was young (say FOSS4G 2006) I was able to find an template; that had the logo and that sort of thing sorted out. At the time I had some fun converting it to open office but the final effect was worthwhile. 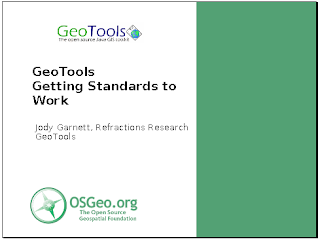 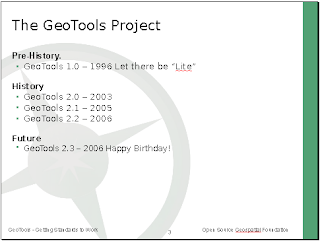 I went looking for one this year and could not find anything; well that is not true I found the excellent logo usage guidelines; this info is spot on: typeface: Bitstream Vera Sans, the appropriate colors to use (in RGB, CMKY, and Pantone) and a range of logos committed into svn - including SVG.
I was able to "update" the osgeo template as shown here: 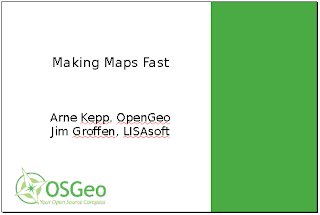 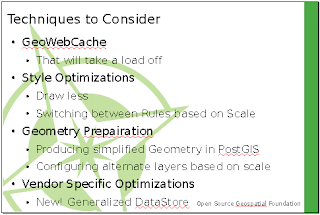 Having access to the SVG logos was great as I was able to rip apart the logo in order to generate a good "background compass", documenting the font and colors etc made this process pretty easy.
I went on to produce a workbook template; based on my experience doing uDig tutorials:
- separate out explanation from steps that need to be follow (even when it is harder to write the effort is worthwhile). I have done this making use of a block of text in the gutter - while not perfect it is the best technique I have found.
- outdent code examples; modern code seems to be more than 80 columns (sigh!)
- kill the margins not a tree; people read the PDFs these days - and margins get in the way
- leave room for author company logos on the title page (volunteers are often doing this as a marketing exercise after all)
- have page numbers for when people are binding hard copies; have the document title in a footer for when they bind several workbooks into a book
Here is what that looks like (follows the logo guidelines on font use etc...): 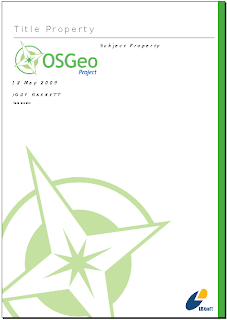 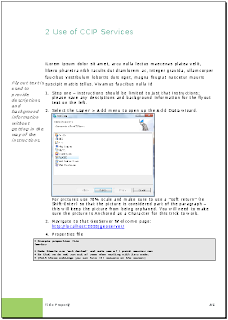 Taken together with the slides this is a nice polished result.
Sending these off to Tyler - looks like some mock ups have been produced from a graphic designer on this page: Marketing_Material_Samples

There is lot to like here:
- the background is great; nice and bright and cheerful and still interesting especially on the workbook cover
- I wonder if we should substitute in the appropriate OSGeo logo for the orgnaization or project putting together the materials? OSGeo - project, OSGeo - sustaining sponsor etc...
The slides leave me cold:
- the green text will vanish on almost any overhead projector
- need more elbow room for content; especially if any diagrams are used - I would hate to make them small and hard to read
- the OSGeo logo leading ahead of each individual slide title is a gets in the way of narative
When I downloaded the slides I also found the fonts used to be windows specific; and not referencing the logo guidelines (do we care?).
I am going to put together slides and workbook template around this material and see what I come up with. Since the above are samples only my feedback should not be considered too harsh - hopefully Tyler can announce when something final from the graphic designer is available.
Posted by Jody Garnett at 11:38 2 comments:

Email ThisBlogThis!Share to TwitterShare to FacebookShare to Pinterest
Labels: osgeo

A couple of things happened to delay this post:

But first here is the server: http://ccip.lisasoft.com:8080/geoserver/

It does not have very many layers configured; and this is as much an interesting tale of GeoServer configuration 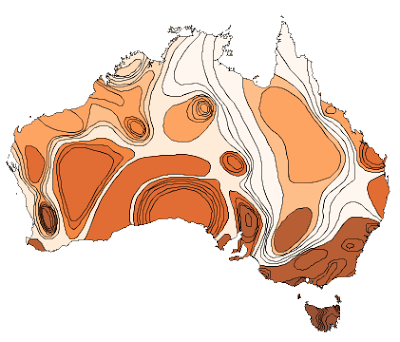 Clearing out the Configuration

Once I had an initial goeserver war configuration – I needed to clean out the working examples so I could start a fresh (hooking up raster data and postgis).

I was able to remove all the featuretypes; but the existing raster layers produced a NPE (bug reported GEOS-2818) - so I had to duck out to the data directory and remove the coverages directory by hand.

Aside: When I initially reported GEOS-2818 I did not choose a good title; and thus the bug was not understood; it is very important to take the time to report a problem in a clear fashion; and list the steps for a developer to reproduce the issue. It is of course amusing being caught out on this mistake :-)

Next up I tried setting up PostGIS; here is where we get into an amusing mistake. My postgis datastore entry "timed out" (when it changed IP address on me). When I went to correct the problem and hit "apply"/"save" etc... the green bar of happiness turned "gray". Removing all the feature types associated with this postgis turned it green again; but anytime I added a feature type it would go back to gray. 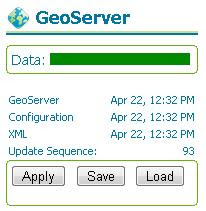 Here is the take home lesson:

- red is an error

I had to go back into the datastore enty and mark it as "enabled"; after a timeout geoserver stops checking the entry until you go in as an administrator and fix it! That would be an amazing way to lose track of a bunch of layers...

I also had a merry time filling out a shapefile where the prj file was not provided. You can entry in "EPSG:4326" into the field; and that works fine for the "Generate" button to produce you a valid set of bounds - but it does not work fine enough to "Submit".

Apparently you are supposed to enter "4326".

I tried out the button to create a new style; and was in for a bit of hurt. The generated style did not initially include a "propertyName" for the label. Correcting this my style was still invalid when I tried it in the uDig style editor (there is an XML page where you can copy and paste styles between uDig and GeoServer or any other SLD supporting application).

I opened up a bug; attaching the generated style here: GEOS-2870

To proceed I made an interesting style for city labels where they are all rotated at 45 degrees.

This next one really slowed me down: the ability to fill default values for the bounds is available in GeoServer. This functionality relies on the the GeoTools library “DataStore” api to ask for the bounding box of a shapefile; or a postgis table.

Because mark was using an experimental PostGIS this functionality was broken for me. GEOS-2839. Community response this time was excellent. The combination of Andrea and Paul Ramsey took my bug report over to the PostGIS bug tracker so it is identified as something that needs to be fixed before release.

Udig was still able to generate the bounds (it has some extra fallback code – where the bounds of the coordinate reference system are used if the other techniques fail). I should try and create a patch in case any other datastore has trouble.

The other thing is Mark has spent a great deal of time entering in table descriptions; this was not being picked up leaving me with either duplicating his work; or making do with poor descriptions: GEOS-2865

The Climate Change Integration Plugfest data is interesting; but I am not quite sure what to do with it. There is a senario and other details here: ClimateChallenge2009