I have had a couple of positive experiences with MapGuide  over the last year. I took part in a training course in in February at Sejong University and MapGuide was well represented in recent series of GITA workshops.

The good news - it is time (for me at least) to take MapGuide seriously.

Is it the source code? Not really - I expect that of an open source project. I find the PHP code examples easy to follow; and the applications I have seen built up around this base seem to be clear and straight forward. A few things came across as difficult: I listened to tails of how hard it was to change selection color from blue to anything else (apparently it was hard coded).  More troubling was a constant theme of difficulty building (both in February and on the recent GITA workshops). Making a project easy to build is always a priority for me - if a developers is willing to build the code they are *exactly* who I need to produce and submit patches to my project. So the source code could use some work.

Is it the license? Well I always admire an LGPL project - generally less hassle for me as a consultant to find work with. But I am willing to work with anything so it is not the license.

Is it the product? The demo provided during the GITA workshop was well suited to the audience and really illustrated a point I often try to make - namely that open source projects need to be fast to try out and see results. If you are spending tens of thousands of dollars on a product chances are you going to try and use it for a couple of days; and perhaps read the documentation. An open source project operates under no such illusions - installation needs to be quick; and the applications as straightforward as possible. So I am afraid the product is what I have expected (it actually reminds me a lot of the Deegree experience).

What changed this time around for me was this ... the people.

Or more to the point one person; Zac Spitzer was an real live developer overjoyed to get things done; and enthusiastic as all get out. He had the usual tails of grabbing patches from trunk and applying them to a system just in time to make delivery; all the kinds of things that we forget are amazing in the open source community.

An advocate such as Zac was exactly what was missing from my previous experiences with Map Guide.

Zac it was nice to meet you; I look forward to seeing what trouble we can cause in the future.
Posted by Jody Garnett at 11:06 2 comments:

A recent post on clever elephant has touched on a topic near and dear to my heart - the value (or lack there of) of OSGeo as a brand. This discussion; and the importance of it, was one of my initial passions with the idea of OSGeo (and one aspect that interested the GeoTools community in the process).

I find that the current web site is very much focused around the foundation itself and the member projects. I would like to see a different approach namly to focus on the products and the abilities of the open source geospatial software.

I started just such a discussion with the web committee in 2007 - before the prospect of getting GeoTools through graduation sucked up all my time and energy. My understanding is the marketing committee currently has the mandate in this area.

Here is the WebCom OSGeo Site Focus wiki page where I gathered up my ideas last time.  The idea was to profile example users - where each user has an answer they are looking for:That is probably enough direction for a reorganization ..the really hard part here is to motivate the production of content for the website - in the past I had two hopes for content production:
I am less hopeful now - seeing the recent GeoServer branding exercise I am going to have to add:
In doing the research for the wiki proposal mentioned above I went through several websites; apache.org , eclipse.org and the OGC site. There was a contrast in approaches; apache reduced their branding to single logo stamped on each web site; eclipse.org and the OGC site were much more user aware providing common navigation; background papers and such like to help people make informed decisions and not lose their way.
The idea of OSGeo as a brand has also come up with respect to sponsorship and project participation. I have gone over the same three websites with a prospective sponsor - with the idea of seeing what they would get for their money with each a approach.
Several interesting observations were made - on our website currently sponsors are safely sheltered on small web page. This approach can be contrasted with the OGC site where a rolling banner shows sponsor logos.
A second difficulty was that it was hard for a sponsor to communicate their expertise in a given area or with a given product. The pages for each product had no room for sponsor logos for example. In this the eclipse.org site shares our bias - on eclipse.org the only way to figure things out are to look at who members of the steering committee work for.
Posted by Jody Garnett at 13:25 1 comment:

Welcome to Lisasoft - and Nearest Book

I just picked up on this Nearest Book meme over on Sean Gillies blog; this was really good timing as my freight from Canada arrived today at LISAsoft  HQ. I actually arrived at LISAsoft last week but have been on the road at a series of GITA workshops as seen on Zac's recent post.

So with out further ado:

Luke Hohmann, Beyond Software Architecture  . The phrase is part of a sidebar on "Bug Severities, Priorities, and Normalization". 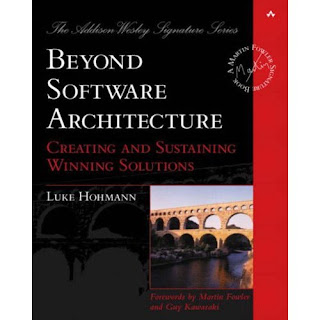 I keep this book close to act as my conscience as a software professional; it contains all the advice and perspective I lose when I get excited and close to the raw code. Which is not to say it is perfect; this phrase is part of a chapter called the Difference between Marketecture and Tarchitecture :-)


Whew - it is a good thing this was about books; the closest thing I have unpacked is the Family Guy in geek friendly UMD format.
Posted by Jody Garnett at 16:26 1 comment:

I am going to be attending the GITA GIS Technology Workshops:
Hopefully I can hunt down the members of the OSGeo Australian-NZ group (which I had the honour of putting together a logo for).
Posted by Jody Garnett at 13:22 1 comment: