I have been having a solid couple of months updating the geotools docs from a wiki - to sphinx. I thought I would share a couple of before and after examples with you.
If you are interested in keeping pace with this documentation effort you can review my twitter feed; it seems that is all I use it for.
Versioned
Right off the bat we can see progress in the form of a latest and stable user guide matching a specific version of GeoTools. This will allow developers to grab a hold of the docs for the version of GeoTools they are using (I still get questions and bug fix requests from GeoTools 2.1 in 2003 ).

BEFORE
Wiki User Guide (examples ranging from GeoTools 2.1 through to 2.7)

BEFORE
Our initial meet the library page included this rather bright and cheerful graphic.

The problem was this graphic was drawn with viso (hardly an open source tool); more to the point it could not be updated as new functionality was added to the library.

We also had a few class diagrams done with random tools.

AFTER
The new welcome for geotools overview offers a nice sedate graphic. 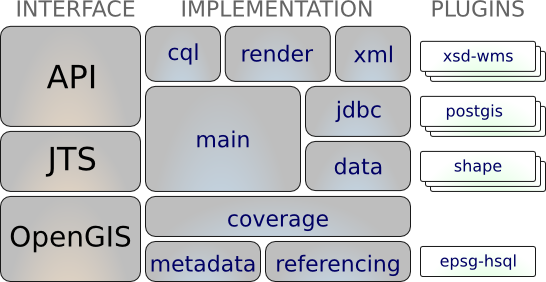 The interesting thing is it is now drawn with InkScape as an SVG file and included in the source code. So hopefully others can edit it.

I have also been able to commit ObjectAid diagrams into the code base. These are live diagrams generated by dragging your source files onto the page from within eclipse. They also have an auto image setting so the diagrams can be updated as your classes change.

The up side of this is more diagrams in the docs; and that the diagrams will be up to date.

Code Examples
One of the big changes (and motivations) behind using sphinx rather than a wiki was the ability to use live code examples in the documentation.

BEFORE
Here is an example from the wiki (Hint it does not actually compile):

AFTER
And after we have something that we know compiles and has had the eclipse auto formatter take a run at it for readability.
Ease of Use

Another obvious change as I go through the docs is the strides made to make development easier. From utility classes such as DataUtilities, JTS and CRS through to helpful base classes.

BEFORE: AbstractDataStore
This class was the base for our initial GeoTools 2.0 DataStore API; as such it grew all kinds of interesting tricks as it came to be all things to all people. 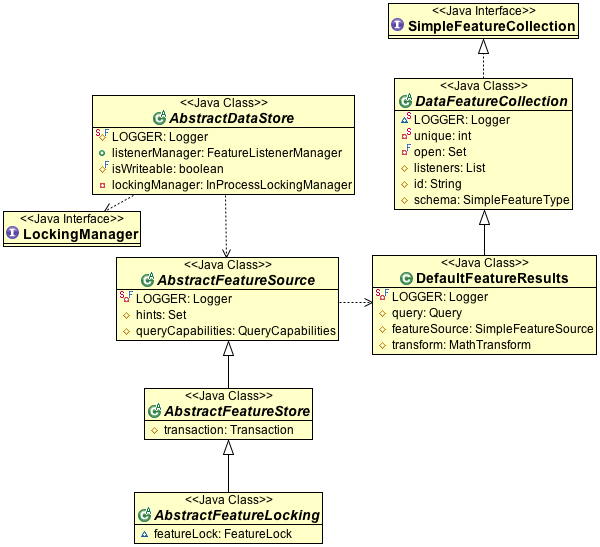 I have left off several classes from the above diagram to protect the innocent.

AFTER: ContentDataStore
Justin and I made a new start with ContentDataStore focused on only asking developers to do the bare minimum needed to support their data format.
And handling all the DataStore, FeatureSource / FeatureStore / FeatureLocking, FeatureCollection/FeatureIterator, FeatureReader / FeatureWriter stuff for them with no additional subclassing. 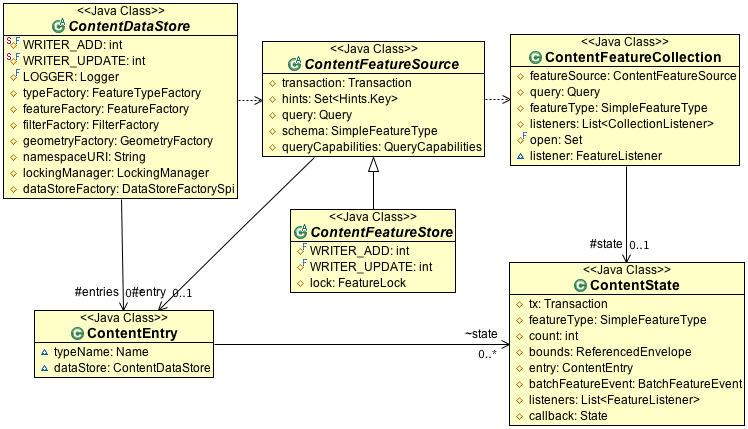 Details only a developer could love:

Email ThisBlogThis!Share to TwitterShare to FacebookShare to Pinterest
Labels: geotools